Eli 2012. Booth 2018. Opinions on everything are strictly my own and don't reflect those of my employer, university, or spouse.
Skip to content

Back at it again, with 5 books I read that totally changed my perspective on life, business, and coffee.  I would love to hear of any good books you’ve been reading, so DM me if you have them!

First, to commemorate the centennial of Armistice Day (the end of World War I), I picked up All Quiet on the Western Front, which (although I think I was supposed to read it in high school) I only saw the film for.  The book is far more gripping. In addition, I was recommended 1944 to discover more about the pivotal year in the second World War (the 75th anniversary of the end of that conflict is right around the corner too).

Second, I took a deep dive into business books as I started my next chapter in corporate strategy.  I’m making my way through Influence and The Basics of Hoshin Kanri to understand how decisions are made in large companies (or rather, how someone can make decisions “happen”).  This sort of plays on my theme last year of psychology books with true-to-life lessons (like Kahneman and Haidt), but from a more industrial/organizational lens.

Finally, I took the time to dive deep into what I say is a passion with some actual reading.  While a grad student, I found a wonderful local book entitled Craft Coffee that dives into the art and science behind coffee picking, brewing, and paraphernalia.  For any coffee-lovers, this is a great way to get quickly versed with what temperature to brew at, how to grind, and much more.

As with last year: rather than editorialize about each book individually, I’ve copied in the Amazon descriptions below (and included a link to Amazon Smile – go pick a charity of your choice!)  If you get some time this holiday season, these are definitely worth the read.

All Quiet on the Western Front, Erich Maria Remarque.  Paul Baumer enlisted with his classmates in the German army of World War I. Youthful, enthusiastic, they become soldiers. But despite what they have learned, they break into pieces under the first bombardment in the trenches. And as horrible war plods on year after year, Paul holds fast to a single vow: to fight against the principles of hate that meaninglessly pits young men of the same generation but different uniforms against each other–if only he can come out of the war alive.

1944: FDR and the Year that Changed History, Jay Winik.  1944 witnessed a series of titanic events… But millions of lives were at stake as President Roosevelt learned about Hitler’s Final Solution. Just as the Allies were landing in Normandy, the Nazis were accelerating the killing of millions of European Jews. Winik shows how escalating pressures fell on an infirm Roosevelt, who faced a momentous decision. Was winning the war the best way to rescue the Jews? Or would it get in the way of defeating Hitler? In [1944] one challenge—saving Europe’s Jews—seemed to remain beyond Roosevelt’s grasp.

Influence: Science and Practice, Robert Cialdini. Written in a narrative style combined with scholarly research, Cialdini combines evidence from experimental work with the techniques and strategies he gathered while working as a salesperson, fundraiser, advertiser, and in other positions inside organizations that commonly use compliance tactics to get us to say “yes.”…  Cialdini organizes compliance techniques into six categories based on psychological principles that direct human behavior: reciprocation, consistency, social proof, liking, authority, and scarcity.

The Health Care Handbook: A Clear and Concise Guide to the United States Health Care System, Elizabeth Askin, Nathan Moore, Vikram Shankar, William Peck. The Handbook is the one-stop guide to the people, organizations and industries that make up the U.S. health care system and major issues the system faces today. It is rigorously researched and scrupulously unbiased yet written in a conversational and humorous tone that’s a pleasure to read and illuminates the convoluted health care system and its many components. 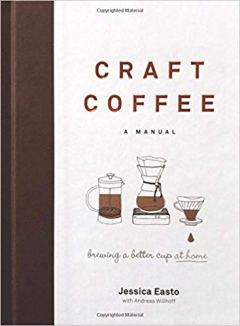 Craft Coffee: A Manual, Jessica Easto and Andreas Willhoff.  Written by a coffee enthusiast for coffee enthusiasts, [this] is a comprehensive guide to improving your brew at home. The book provides all the information readers need to discover what they like in a cup of specialty coffee—and how to replicate the perfect cup day after day. From the science of extraction and brewing techniques to choosing equipment and deciphering coffee bags, Craft Coffee focuses on the issues—cost, time, taste, and accessibility—that home coffee brewers negotiate.